A Place of My Own: The Education of an Amateur Builder 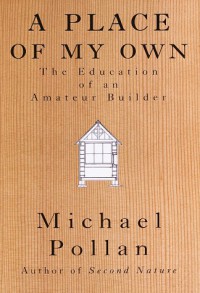 I won't tired you, Dear Reader, by lamenting that this website lacks the ability to grant half-stars in it's reviews. Suffice it to say that were that to exist, the rating of this book might edge slightly higher. But this is lusting for the impossible, to dream of unicorns when all you have is corn. I speak not from desire but from the wish to impart that I did in fact rather like this book.

Ostensibly we're given to believe this is a classic Fish-out-of-Water tale of a writer who decides to build his own writing hut, a little outbuilding on his recently remodeled home in semi-rural Connecticut, as though that state comes in other flavors. Readers of the Author's other books will know that you cannot escape without whatever comes into focus of the authorial lens being offered as a deeper insight of modern life, if not the human condition itself. Pollan doesn't disappoint. The Reader is led through the process from soup to nuts, beginning with an enormous consideration of site selection which includes the Author running down hills and randomly sitting around his backyard in an attempt to see what a pre-historic man might in searching for a camp for the night. Obviously Pollan profits from having a comfortable and fully appointed home at the other end of the lawn. The book is quite good, laboring only when getting lost in mental eddies of thought about the nature of space, architecture, and man's relation to nature. All is acceptable but for the section on windows, which ironically I found fairly opaque, and seemingly interminable. Pollan's thoughts throughout the book are heavily influenced by previous thinkers, but he escapes all criticism from me on the merit of clear and frequent reference, excellent choices of source, and at least in the edition I read (loaned to me, I must say with the greatest of thanks, by a fellow library trustee and recent GR member I shall leave nameless as I lack their permission) by a full bibliography broken down by chapter.

So why not more stars?
Well, it lacks the linguistic brilliance and original design I'd require for such a life-changing estimation of five stars, and it falls ever so short of four stars by way of the occasional bloated and self-ponderous navel gazing that Pollan falls into (the aforementioned section on windows, for example) that mar the grain of this otherwise excellent book. I DO recommend it, both for fans of the author, or of those attracted to a sort of do-it-yourself back-to-nature-yet-philosophically-inclined-city-folk type of person. Those more familiar with woodwork, construction, philosophy, et al. might not be as thrilled as the newcomer to these topics.